On Thursday May 17th, v1.0 of our new app, AnyList, had been available in the App Store for one week. Our plan with v1.0 was to make sure we’d get through the app review process and get our friends and family to start using the app. We had 215 registered users.

Before telling the press and the world at large about the app, we wanted to wait for v1.0.1 of the app to be approved, since it greatly improved the user experience on first launch. We also felt it was important to fix some architectural performance problems in our server code.

On the afternoon of the 17th, my co-founder Jason and I were sitting around and discussing how to improve our server performance when I suddenly noticed our server logs flying by much faster than usual in an open terminal window. Jason launched iTunes and discovered that AnyList v1.0 was featured on the front page of the App Store as a New and Noteworthy app. 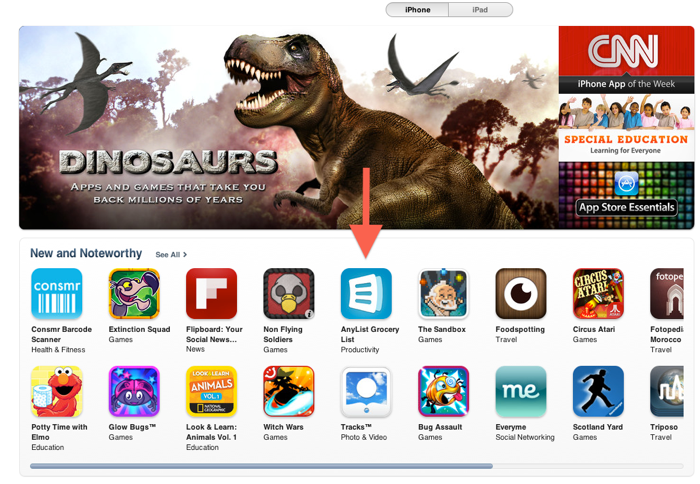 No one from Apple contacted us before, during, or after we were featured, so this was a total surprise. After spending about 15 minutes convincing ourselves that what we were seeing was real and celebrating our good fortune, we realized that we were completely unprepared and we’d better come up with some sort of plan.

The first thing we did was request an expedited review of AnyList v1.0.1. It had already been submitted to the App Store, and since it improved the first launch experience so much, we really wanted all of the new users we’d be getting to have it. For those that haven’t requested an expedited review, when you do it, Apple sends the following auto-reply:

“We are working hard to process submissions as quickly as we can and expect to complete the evaluation of your request within 1 to 2 business days. If your request is granted, you will be notified and your app will be submitted for an expedited review.”

Taking up to 2 business days just to evaluate the request didn’t sound particularly expedited to me, but fortunately the request was granted the following day and v1.0.1 was approved in time for us to release on Friday, the 18th.

Meanwhile, our server was getting hammered, with multiple new users signing up every minute. Although the server seemed to be handling the load alright, we weren’t sure when we’d reach the breaking point. If we reached that point and hadn’t fixed our architectural issues, there would be no way to scale the service and our sudden success would likely turn to defeat, with lots of angry users and 1 star reviews in the App Store. So we started working round-the-clock on the architectural issues, since we knew they’d take at least a couple of days to implement and we weren’t sure how much time we had.

I put out a call to the founders from our Y Combinator batch (Summer 2010), letting them know what was happening, and asking if any server experts would be able to help us in an emergency. Almost immediately I got several replies and offers to help. The benefits of YC extend way beyond the weekly dinners and Demo Day.

Interleaved with all of this were periodic checks on our App Store rankings, latest reviews, and responding to a constant stream of incoming user feedback and support requests via email (we make it really easy for our users to contact us within the app). By Sunday the 20th, we were the #1 top free productivity app in the U.S. store (higher than Gmail and Dropbox) and had cracked the top 100 overall free apps.

Being featured in New and Noteworthy lasts one week, with new selections revealed each Thursday. So we figured that on Thursday the 24th we’d no longer be featured. Fortunately, that wasn’t the case. It turns out that there is another weekly featured section, slightly less prominent, called What’s Hot. I don’t know how the What’s Hot selections are chosen, but it seems like most of the time about 90% of the What’s Hot section consists of apps that were New and Noteworthy the week before. So on the 24th, we moved to What’s Hot and continued to be featured.

Around this time, we completed the architectural changes to our server code, so we could finally sleep a little better, knowing that if we reached a breaking point, we’d be able to scale up.

During our week in New and Noteworthy, we were getting 5,000 - 8,000 new users per day. Moving to What’s Hot cut that approximately in half, as you can see in this graph of our user count during the two weeks we were featured: 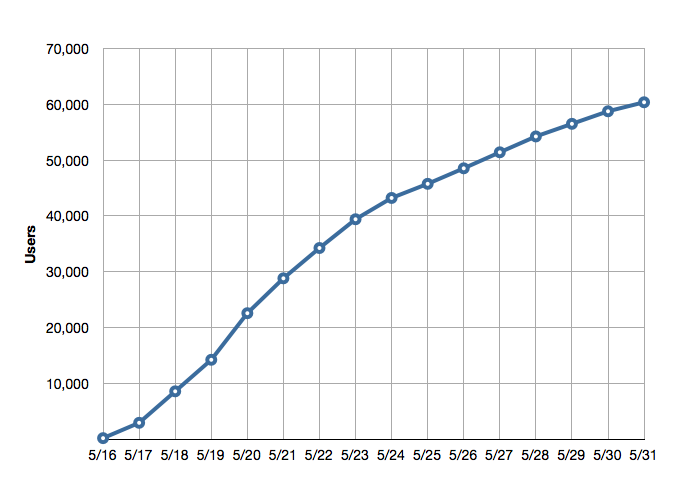 By the time we were removed from What’s Hot and no longer prominently featured on the App Store, we had gone from 215 users to over 60,000 users.

This was obviously a dream scenario for us. So, how do you get your app featured in the App Store? The answer is that we honestly don’t know. We’ve had no communication from Apple since we released our app. We have no idea if we’ll ever be featured again. I’m sure luck is a large factor.

That said, I was surprised by how many emails we got from users who told us they had just purchased a new iPhone and AnyList was the first app they had ever downloaded. Given that Apple is selling tens of millions of iOS devices each quarter, and New and Noteworthy apps are what the user sees when launching the App Store for the first time, maybe I shouldn’t have been so surprised. So my best guess at what to focus on if you want to get featured is to build an app that Apple would be happy to have as the first app a new customer ever downloads.

Of course, if anyone out there knows more about how to get featured and wants to provide us with the special direct line to the App Store editorial team, please let us know, privately. :-)